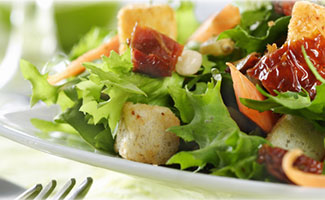 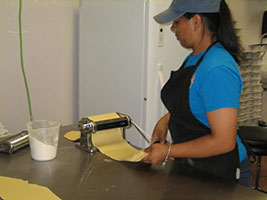 The front cover of our menu has a short story of how our restaurant came to be called Bia Maria's. Everyone keeps asking for more of the story so here goes...
James and I took a trip to Medellin, Colombia to adopt two children, Maria (5) and Oscar (14 mos). A funny side to this story is that we were told that Oscar was 3 years old, so when we got there James was wondering, very out loud, why he was just learning to speak and was still drinking from a bottle. I knew better than to believe that he was three but this didn't shut James up.
Well since Oscar was just learning to talk he could not say Maria. She was the only family he had ever known and was the only constant in his young life so naturally his first word was Maria or as Oscar called her Bia. He said it all the time and the name has stuck ever since.
When Maria was about 13 she started to take an interest in helping around the kitchen. She quickly became a gourmet  cook and was inventing dishes on her own. As she got older we  tried to figure out  something that the family could do as a business together and a restaurant was the obvious answer.
Now Maria has the opportunity to constantly be trying new receipes not only on just us, but our customers. You never know, when you walk in you may be offered a sample of her latest creation/experiment.